Hello to each one of you. I would like to send out a message. We who are heirs to the Islamic faith have received as our legacy a spiritual culture that is presently being held hostage by barbarity. It is high time we did something about it. We cannot leave this, our treasure, perish in the hands of those who distort it in the name of their narrow, backward view of what it represents. We cannot let it be perverted by terrorist monsters. That is why we can no longer just keep repeating Islam needs to “be reformed”. If we are serious about this, if we really want to give rise to a new Islam of Enlightenment, within ourselves and around us, then we have to solemnly proclaim two principles.

The time for mandatory and systematic application of these precepts has gone. Each of us must now learn internal autonomy, that is to say teaching ourselves to build our own spirituality from questions whom no one shall ever answer for us. These questions are “What do I really, personally, deeply need on a spiritual level?” and “What in the wealth of past and present wisdom, from Islam and from other sources (such as meditating, reading, praying, performing rites, cultivating virtues, making life choices advocating ideals or values, etc.) can help me to grow in humanity, to flourish in being and in conscience, to accomplish myself and help all life on earth bloom?”.

No one should be allowed to meddle in this private inward searching, and every spiritual education should strive to help us attain it. Nobody – no religious dignitary, no local or familial leader – should impose on anyone their own vision of Islam as the only true or right way to worship. Each of us must create their own relation to Islam. We can achieve it through exercising our own reflection and judgment as well as by engaging in dialogue and companionship with all those who are also searching for meaning, whether they be Muslims or not, believers or not, for we can enrich one another from our differences and cross questioning. We must stand together now – over and above the existing chiasm between religion and atheism – and help one another to tackle the great issues of human condition relating to justice, truth, happiness, love, and the meaning of life and death.

As heir to Islam and promoter of an Islam of Enlightenment, we demand to move on from sharîʿa (religious law) to the right of every conscience to find by itself and for itself its sirât al-moustaqîm (the right way). We claim the right to ijtihad (“individual effort to understand the Quran and  tradition”) for all, with no exception made for anything deemed too sacred to be questioned. We proclaim that every individual should have the right to define their own relation to religion as well as to switch faiths or have no faith – and incur no accusation of apostasy. We consider that the word “islam” does not mean “submission”, but “consecration and peace”, as in “free consecration of oneself to what we personally judge to be right and good”, and “peace and mercy towards all human beings as well as  towards Nature itself.”

This principle is but an emanation of the famous verse from the Quran “Lâ ikrâha fî Dîn” (“no compulsion in religion”) ; each woman and each man of Islamic faith must be accepted by right as completely free and responsible of their own choices on the spiritual, moral and social planes of their lives.

These principles must be the requirements and the aims to a complete reform of Islam. They have several consequences: absolute respect of the dignity of any human being; refusal of any act of violence or revenge against anyone; complete equality between men and women and constant promoting of women’s rights; rejection of any type of discrimination, racism or antisemitism; acceptance of all world views and even more, brotherhood towards anyone who promote them; personal freedom of conscience, of reflection and of action; fighting for social justice and against unfair treatment of any class or people; promoting of anybody’s means to take their lives in their own hands and aim at self-accomplishment; universal access to the most advanced education possible; a right to exercise their reason and their judgment on any subject; freedom for Science to examine what the Quran and other sacred texts say of the creation of the universe and of mankind without opposing symbolic tale and rational knowledge; democracy with no political power for religion; adaptation of religion to each society’s context in the respect of the laws, culture and lifestyle of this society; advocacy of animals’ rights and sustainable growth.

How long this list is shows how extensive is the critical and creative work that must be done. Every heir of Islam commits to make these principles prevail in humanity and to sustain them in their own life.

Any violation of these principle in the name of Islam would be illegitimate, with no exception. Every woman, every man on Earth who share these principles are our sister and brother in humanity, whether they be Muslims or not. Our Oumma (“community”) is humankind – a universal brother- and sisterhood between all human beings, be they atheists, agnostics or believers. Beyond humanity, our sisters are brothers are all living beings.

Instead of repeating to no avail that “real Islam” is respectful of human rights and of all forms of life, we as heirs to Islam and promoters of an Islam of Enlightenment, must rally to build a new Islamic culture that really stems from this respect. I call on all the women and men who relate to these two principles of the Islam of Enlightenment to spread them by all means and sources at their disposal, by translating them in all languages so as to make them known by as many people as possible. I call on non-Muslims as well as Muslims to assert their attachment to these principles so as to advertise how deeply an Islam of Enlightenment is at one with the highest principles of universal humanism.

Too many Muslim women and men nowadays are vainly searching for a middle way between hiding behind a mechanical repeating of tradition (taqlîd) or giving it up entirely. I offer them this Islam of Enlightenment as a way to preserve a faithful loyalty to our heritage while renewing it today in view of tomorrow. What will remain alive in Islam to us as its heirs is what each of us will have decided to keep of those treasures of the past to inspire their spiritual lives and to build peace, justice and fraternity between all human beings.

Salâm to each one of you. 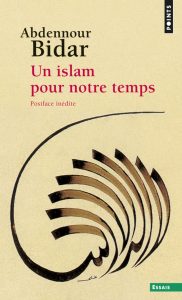